From January 29 th 2022 changes are being made to the Highway Code that will affect every person in the country. When turning left if a pedestrian is waiting to cross the road then road users will have to give way to them. This is going to cause injury and deaths to pedestrians for the following reasons. 1. When giving way to the pedestrian vehicles approaching from the pedestrians right may not see them and collide with them, 2. the pedestrian may know the new rule but the vehicle driver may not and the pedestrian could walk straight into a collision with the vehicle. 3. As the pedestrians get used to vehicles giving way they will walk straight into the road expecting vehicles to stop for them, as many pedestrians do not wait until it is safe at zebra crossings. Add to this the extra fumes going into the atmosphere because of vehicles ticking over whilst waiting for the pedestrians to cross and the rear end crashes that will inevitably occur i am of the opinion that this Highway Code change is ill thought out and it smacks of a jobsworth seeing to be doing something. This ridiculous idea needs to be scrapped before it starts. Pedestrians are better off being left to their own judgement as to wether it is safe to cross the road.

Cyclists are going to be encouraged to ride in the middle of the lane and were there are two cyclists ride two abreast, who the hell thought this one up, obviously someone who 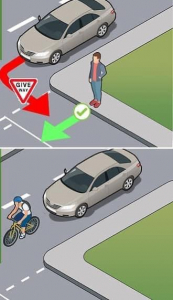 cant drive!!! can you imagine the oncoming vehicles in your lane as they overtake dangerously its bad enough now god knows how many crashes these new rules will create. As with the so called smart motorways which have been postponed awaiting reports of the safety of theses stupid roads i wonder just how many pedestrians, cyclists, drivers will have to be maimed or die before the powers that be see sense. i wont hold my breath.

Want to join the discussion?
Feel free to contribute!